Taitung is a pretty quiet city.  I am staying in a Bed & Breakfast (Minshu) near the train station so there really isn’t much going on around the area.  It’s just like a typical neighbourhood with a bungalow converted into a B&B.

On the recommendations of the staff at Star 101 Guest House, I decided to head all the way to Sanxiantai, about 2hrs away by bus.  I don’t regret the decision as it was quite a nice place to visit!

On the way there (with the friendly taxi-driver in my last post), I decided to drop by the Aquarium of Anemone Fish.  I wasn’t expecting much but since I was somewhat of an aquarium fan, I thought, why not?  Anyway, it was only NTD150 for the entrance fee.

The museum was not really a big deal (not worth a visit if you are not really a fan) but I saw two sights which to me, made it worth it.

First was a 2.5m long white eel and the other were these really cute worms in the sand. 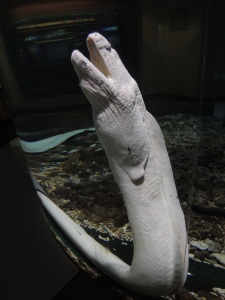 After the visit, I made my way to Sanxiantai on the bus as recommended by the sales person at the aquarium.

Sanxiatai is basically this little island of 3 rocks linked by a bridge of eight arches.

Maybe it’s because I’d recently watched the re-release of Jurassic Park 3D in Singapore cause as I approached the island from the Eight-Arch Bridge, I couldn’t help thinking that it was like an island where dinosaurs roamed!

The weather was really REALLY HOT and what I thought was supposed to be a nice stroll ended up to be quite a workout.  As I explored the island, I decided to try to reach the Lighthouse, not knowing what I was in for.  It was one heck of a trek across rocky beaches and then a climb up steep steps to the lighthouse.  The lighthouse was nothing more than a little tower but it sure was a sense of achievement.

On the way back from Sanxiatai, on an impulse, I decided to drop off at Dulan where there was some sugar factory which was converted into a display of local aboriginal art.  That was quite a disappointment so I continued on to this place where water apparently flowed upwards! 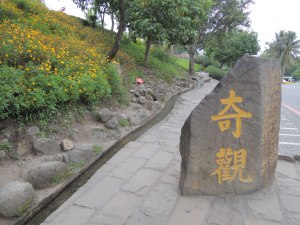 Although it was just a little ‘longkang’, the water actually flowed upwards!  That was pretty cool and I can’t wait to google and find out why it happens here.

Wow… just had an incredible experience of Taitung hospitality.

I had missed the local bus to Sanxiantai and had to wait 2 hours for the next bus. So I approached the ticket sales person at the Anemone Aquarium to ask how I could get to the place via taxi or bicycle.  when she called and found out that a taxi would cost about NTD150 (about SGD6) she was extremely reluctant to let me catch a taxi as she felt it was too expensive!

She made few more calls and found that a local bus service would go pass Sanxiantai but the bus would be leaving in about 10mins. Although I think I could have rushed to the bus stop in time,  she was insistent in getting her uncle to give me a lift via his scooter. On top of that, the uncle offered me a home made dumpling!

How can you beat such hospitality!  Talk about ordinary people who inspire us 🙂

It’s really quite different arriving into Taitung. The immediate feel is that it’s a slower, more nostalgic version of Taipei.

I’m staying at a B&B – Star 101 Guest House, just a short walk from the Train station.  The lady at the reception was really friendly and gave me plenty of suggestions. Am on my way to Sanxiatai… not even sure why, except that it was highly recommended.

Was waiting for the regular tour bus when a really friendly taxi driver asked if I wanted to share a cab to Chenggong Town near Sanxiatai.  I know what people say about taking transport with strangers… but well, it is a registered taxi and the guy looks really friendly and… yeah, I know the reasons aren’t too justified but it really cuts my travel time by half and YOLO right?

On my way to Taitung.  Decided to take a domestic flight which cost about USD100.  The Songshan airport is just minutes away from my hotel.  By taxi, it was just NTD125 (about SGD5).

Songshan domestic terminal feels like a nice luxurious bus terminal.  Plenty of sofa sets to rest and wait for my flight.  It was a first for me to check-in at the Mandarin Airlines counter then drag my luggage to a different counter to check it in.

Breakfast was at Family Mart at the airport but I really like the yong-tau-foo style soup. This might become a regular meal for me! Loved the bamboo shoot! 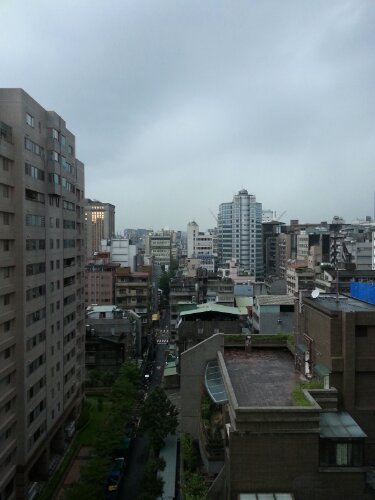 Saw this idea from a friend’s post so I thought of trying it this trip. Will post a pic from my hotel room window. (Though this pic is a bit of a cheat coz my hotel room at Green World had no window, so I took this from the window just outside my room door.)

It was almost 6pm when I’d checked in so there really wasn’t any attractions/sights I could visit.  So, after a quick google, I decided to do my obligatory pilgrimage to the electronics heart of Taipei.  🙂

Google told me most of the shops were centred in Guang Hua Electronics Plaza and a quick map search told me I was just 15mins away on foot (what on earth did we do before google maps!?).  So after a brisk walk, I finally reached the mall.  It’s quite similar to Sim Lim Square in terms of the types of shops.  Prices wise, were quite good.  I checked out a 32gb micro SD card which cost around SGD25-27.  Not too bad.  Managed to catch sight of the new Acer ‘Star Trek’ Aspire R7.  Decent looking machine but much too heavy to be considered for a laptop/tablet hybrid.

When I left the Guang Hua Plaza (pictured above), I realized there was another one ‘Guang Hua Electronics Plaza’ located just behind.  From the other internet sites, I think this was the one I was meant to visit.  This one was somewhat smaller but it was a nice window-shopping nonetheless. 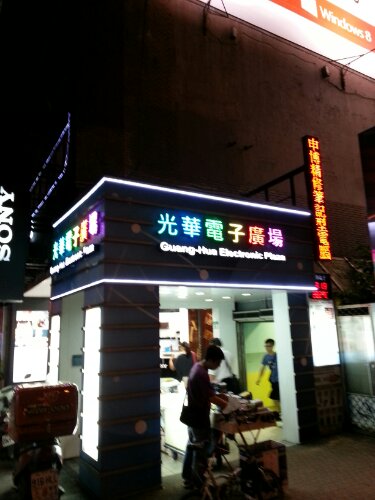 Made my way back to the hotel on foot after that and together with a take-away meal from 7-Eleven, my 1st day in Taiwan’s over.

Gotta wake up early tomorrow to check in at 7am for my 8am flight to Tainan.  Excited!

Hopped onto one of the many airport to city buses and took about 1.5hrs to my hotel! Frankly, didn’t really expect it to take that long.  I think the distance of the hotel from the airport is less than 50km.  So that was a big of a cold start to the trip.  The tourist counter didn’t recommend I take the train so I guess this was probably the best method.

My first hotel was about a 10min walk from the bus station so that wasn’t too bad.  The hotel’s pretty decent for less than $100 a night. 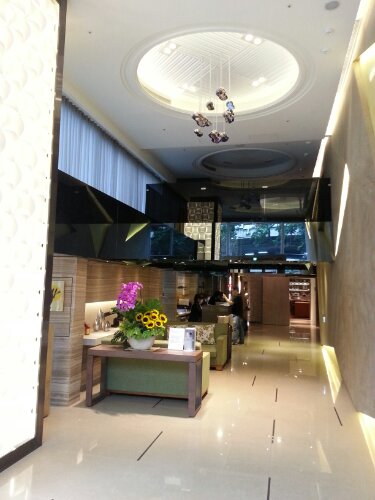 Room was pretty small but nicely furnished and done up.  Comparing it to hotels in Japan, this was perfectly decent.

Anyway, it’s only going to be one night as I’ll be taking a domestic flight to Tainan tomorrow morning.

First Impressions – Taipei is kinda dreary.  As I walked through the streets, I keep thinking & reinforcing my previous belief that Taiwan is really in between China and Japan when it comes to culture & people.  The shops are so reminiscent of the shops in Japan but maybe it’s just psychological, but they don’t seem to match up to those in Japan.  The convenience stores are also at every corner and interestingly, all have this hotpot, very much again like the convenience stores in Japan.  To be honest, I don’t know which country had the hotpot thing first, but since I’d first seen it in Japan, guess I naturally assumed what I saw in Taiwan was copied/imported from Japan. 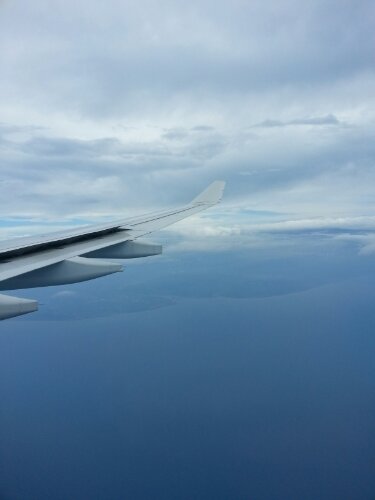 First impressions -kinda spartan feeling.  Taoyuan airport appears more functional than a showpiece.  Immigration was slowish but not too draggy.

The 3G prepaid sim cards are really cheap.  I’m blogging now using the Chunghwa card which gives me 10 days unlimited Internet access with some call time for only NTD500 which is barely SGD22! Compare this to the SGD15 per day unlimited data roaming by M1. 🙂  Registration and purchase was a breeze and after popping in the sim into ny Note 2, everything was good to go!

I’m on my way in the coach to my hotel where I’ll spend the night before taking a domestic flight to Tainan tomorrow morning. It’s NTD150 to the hotel and I’m not even sure how long the journey will take. Heh. Such is the life of an independent explorer. 🙂

Second time in Taiwan but I think the first time didn’t really count cause I was bringing a group of students on an exchange programme so I didn’t really explore Taiwan and for that matter, Taipei.  After some ding-donging, finally decided on a Taiwan-Hong Kong trip, largely due to (1) time available, (2) cost and (3) lego!

I was initially quite ambitious in wanting to do a cycling trip but since it was my first tine exploring Taiwan, I thought I’d bettwr take it easy and not do a big cycling trip.  If this trip tuens out well, I could do a cycling thing next time.

I decided to do a Tainan-Hualien-Taipei trip, largely cause there’s this big hot air balloon festival going on in Tainan. Hope it won’t be a disappointment.

Hoping to do a nice balance of fun and exercise-type stuff and I’m really hoping for good weather.

What is Life if Full of Care, We have no time to Stand & Stare.